Abrupt occlusion of the right peroneal artery in the right calf with preserved patency of the anterior tibial artery to the foot while posterior tibial artery was occluded distally (arrows). There was also flush occlusion of the left internal iliac artery (arrow) while the rest of the arterial tree was normal, in particular there were no signs of atherosclerotic disease. The picture was one of acute thromboembolic occlusion, thought to be cardioembolic given the bilateral occlusions and otherwise normal looking arteries.

The patient was managed conservatively but some weeks later he complained of right calf swelling and an ultrasound scan revealed extensive deep vein thrombosis (DVT) in the right leg. Subsequent CT scan of the torso showed evidence of pulmonary embolism (not shown). Review of the base images from the MRA revealed that extensive femoropopliteal DVT had indeed been present at the time of initial presentation, manifest as low signal in the expanded vein (arrow to right femoral vein on transverse reformatted image from first pass thigh station). 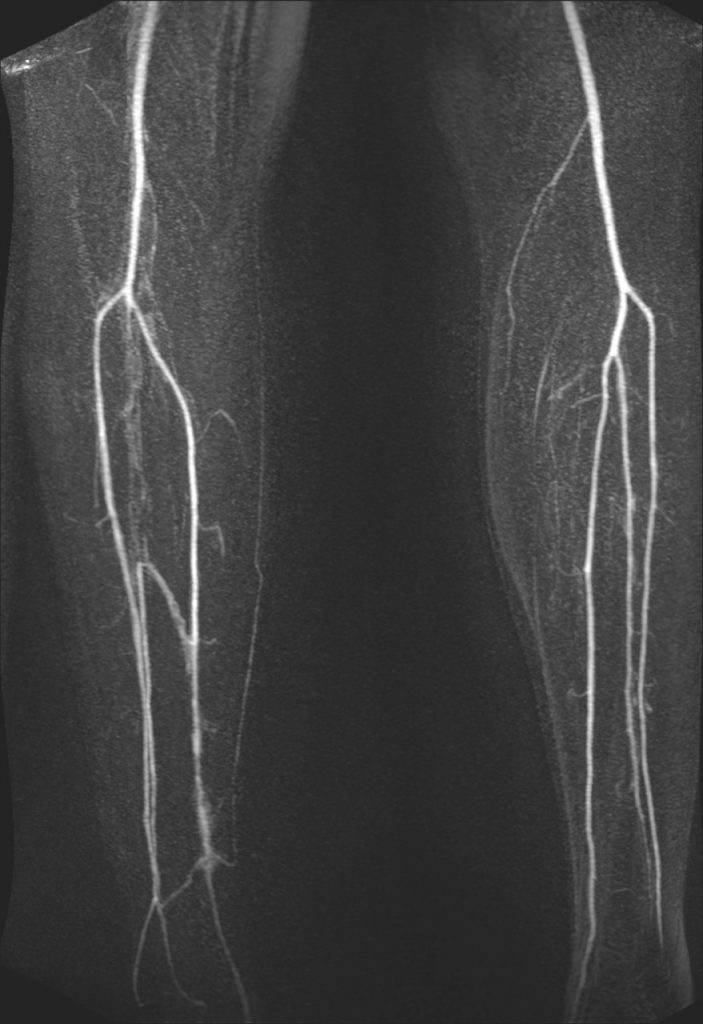 A 45 year-old female presented with acute onset left lower leg pain and a cold tip of great toe. The only past medical history was of  menorrhagia. Examination revealed a cool left calf with femoral pulse present but absent distal pulses and impaired capillary refill. Lower limb MRA was requested to assess the extent of peripheral vascular disease and guide a treatment plan.

Abrupt occlusion of the distal left superficial femoral artery with complete left popliteal artery and posterior tibial arteries also while collaterals refill isolated segments of the anterior tibial and peroneal arteries (dynamic images of calf arteries).  The rest of the arterial tree was normal, in particular there were no signs of atherosclerotic disease. The picture was one of acute thromboembolic occlusion.

The high spatial resolution imaging showed not only the thrombotic arterial occlusions in the left leg but also deep vein thrombosis arising in the calf veins of the same limb extending up through popliteal and femoral vein where it was non-occlusive toward the groin (montage of transverse sections from groin to calf plus coronal reformatted images of calf and thigh). 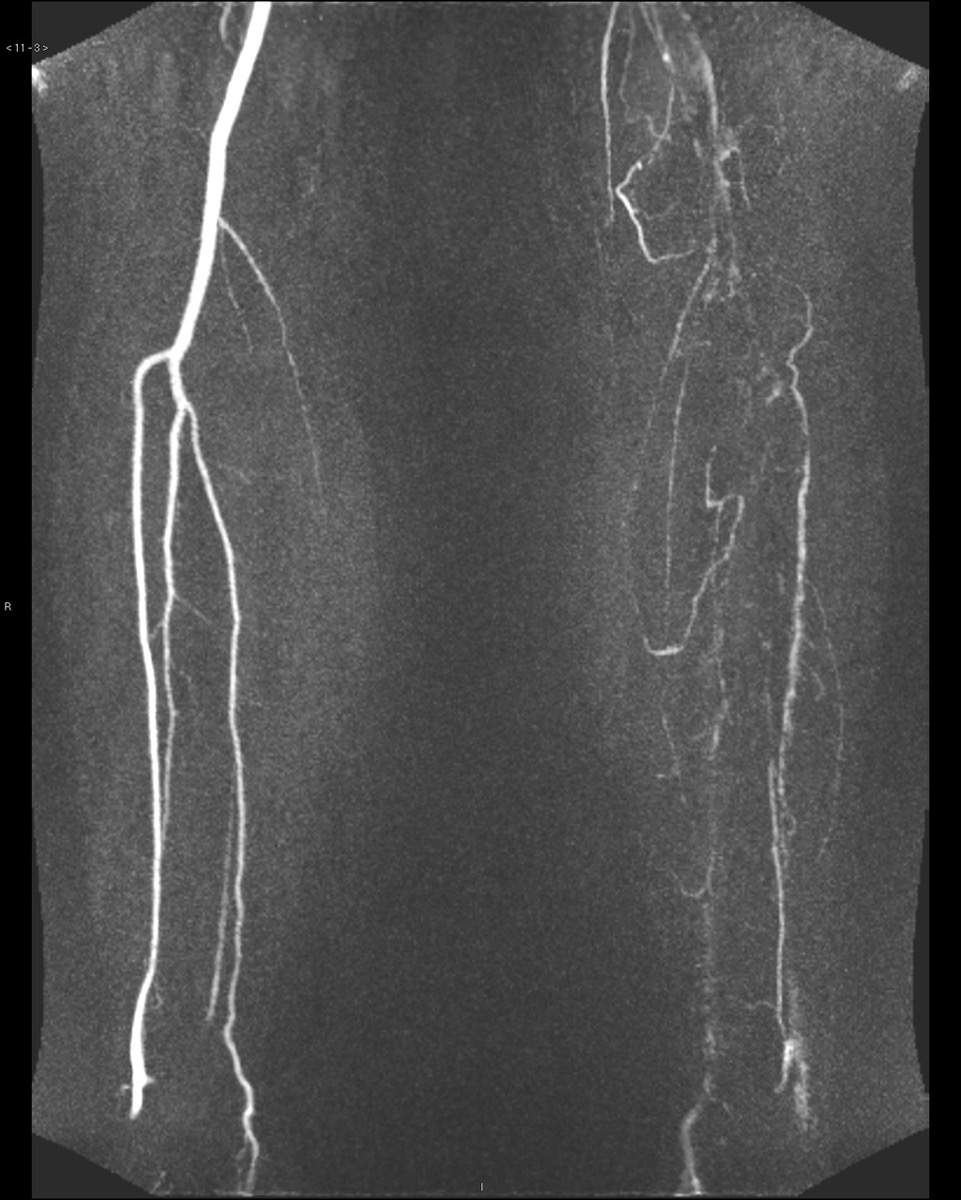 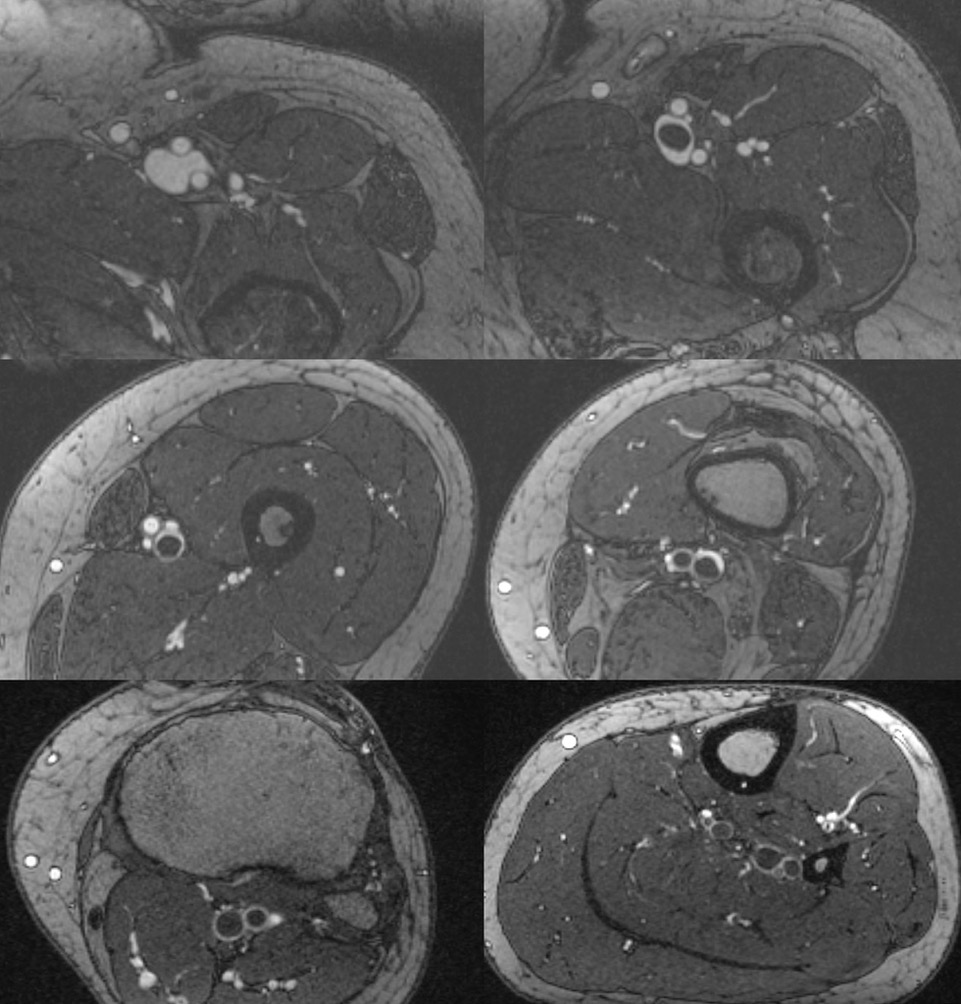 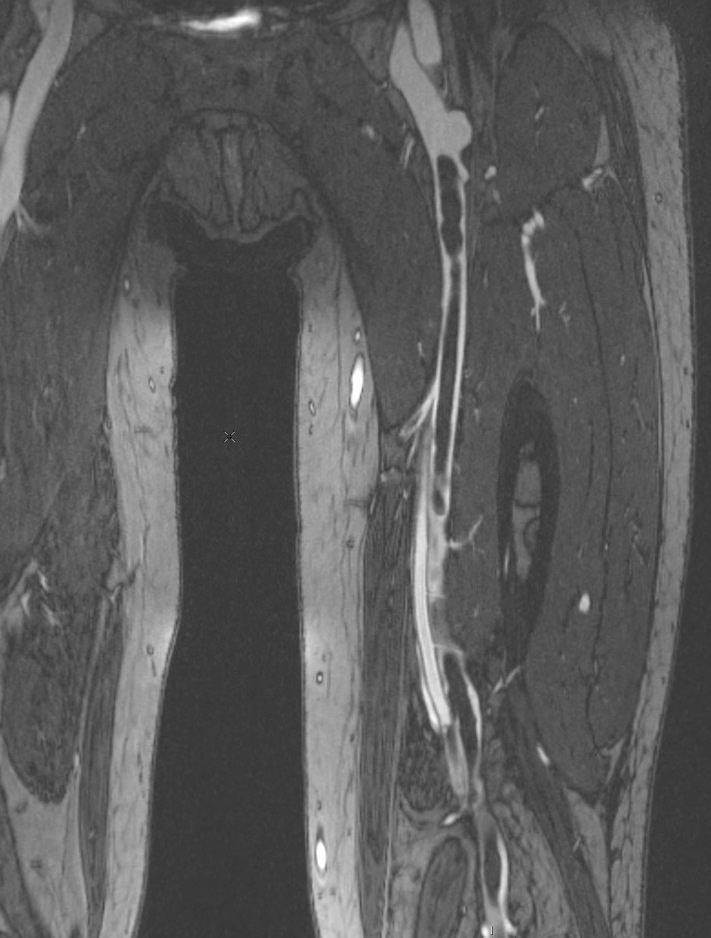 The diagnosis in both these patients is that of paradoxical embolism with the primary pathology being lower limb DVT, which has subsequently embolised with passage through a patent foramen ovale to the systemic circulation.  Fortuitously for each patient this was to the leg, rather than for example to the cerebral or visceral vessels which could have been catastrophic.   The patients both recovered well with conservative measures (the second patient requiring only a later distal amputation of the toe), however, they both remain on lifelong anticoagulation.

If other modalities such as invasive arteriography, CT arteriography or non-contrast MRA dedicated to arterial imaging had been used the true diagnosis would likely have remained occult.  This illustrates a major strength of contrast-enhanced MRA in that it allows imaging not only dynamically but also depiction of venous pathology with delayed imaging.  In this respect late ‘extended phase’ imaging proves extremely valuable and is easily acquired immediately following a standard CE-MRA protocol while gadolinium contrast is still largely resident in the blood pool.  Since the aim at this stage is no longer to capture an ephemeral bolus passage then longer acquisitions can be used allowing very high spatial resolution to be obtained. This allows the vessel wall to be distinguished meaning that vessels lying close together such as the tibial arteries and accompanying veins can be easily distinguished.